The boundaries which divide Life from Death are at best shadowy and vague. Who shall say where the one ends, and where the other begins?
---Edgar Allan Poe

Please to enjoy a little light music with your readings...

The Danse Macabre---The Dance of Death--- what morbidly themed A-Z blog would be complete without it? Of course this ties in neatly with my "A" post, A is for Alphabet, as Herr Hans Holbein was gracious enough to gift us with The Dance of Death Alphabet (which I am unashamedly using daily to decorate each post. Danke, Herr Holbein).

The ultimate meaning behind this medieval art genre is the universality of death. We are all equal in the grave or something like that. Some of the earliest known painted scenes of The Danse Macabre date back to the
early 1400s-- in Paris' Church of the Holy Innocents cemetery. The horrors of life during this time, famines, the Hundred Years War, the Black Plague, all served as a stark reminder that death is ever-present and wholly unforgiving. 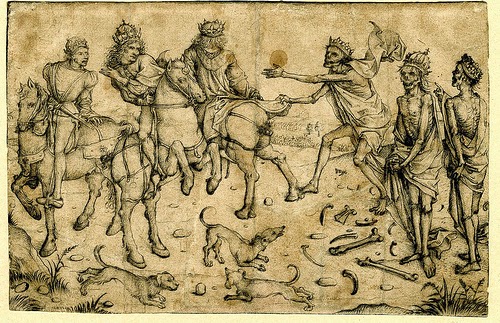 Popular frescoes spread through Europe, with scenes including images of Death heading a round dance, or with lines of dancers alternating living and dead figures. There were also variations of the legend of The Three Living and The Three Dead---- where three young men, whether out on a hunt or walking, come across three corpses who stop the young men to warn them---- (Quod fuimus, estis; quod sumus, vos eritis....What we were, you are; what we are, you will be).

Such constant awareness that death was literally at your shoulder caused not only a desire for penitence but also a need for an entertaining relief---thus the birth of the morbid allegory, the last dance.

Short dialogue plays, alternating lines between Death and his victims cropped up throughout Germany and Spain shortly after the Black Plague's decimation. With so many people falling victim everyday, is it any wonder that those remaining would seek solace? relief? amusement? in the very thing that they were most afraid of?

I personally find that a little amusement in the face of daily tragedies is the only way to stay sane, sometimes---or, at least, to appear sane.

And, as solemn and morbid as the idea of death is, it hasn't stopped us from creating even more entertaining Danse Macabre art and I rather doubt it ever will.

Popular posts from this blog


The mythology and legend surrounding the Banshee is a bit mixed. The most readily accepted story is of a hag-like creature wailing the impending death of someone nearby-- most ancient Gaelic families, especially the more well-to-do families, had their own Banshees that attached themselves to the lineage of the family name. I suppose it was a sign of station for a family to be able to claim their own Banshee--- I mean, who needs an exciting/ tongue-wagging-inciting skeleton in your cupboard when you've got a Banshee wailing in your rafters?
The origins of the more familiar Banshee may have stemmed from the ancient Keeners-- women who were employed to sing a lament at a funeral. The best Keeners were in high demand to "wail" and "weep" for the great personage who had fallen.

The Great families would boast a bean sidhe or bean sith-- a fairy-woman Keener--and having foresight, the Keene…
14 comments
Read more

Scottish Festival and a bit of poetry...

April 16, 2017
The 38th annual Arkansas Scottish Festival was held at Lyon College in Batesville, Arkansas on April 7th - April 9th. This was the first time I'd ever attended. I'm sad to say I didn't even know the festival existed until last year. On Saturday, April 8th, a group of friends and I made the several-hour trek, determined to enjoy everything we could.
The weather was glorious, all bright, bonnie sunlight and mild temperatures. Seemed mother nature approved of the festivities. The campus was appropriately kitted out, and nearly everyone in attendance was properly *ahem* kilted out.
Bagpipes playing, we ate meat pies--- well, mine was a 5-cheese mac & cheese pie--- watched clans parade their colors, got sunburned (darn our fair, Celtic skin), and wanted the day to last forever.
There were a host of competitions, everything from Scottish/Irish dance-offs, sheep dog trials, Tartan races, a Celtic poetry competition, piping and drum trials, even a bonniest knees competition (…
Post a Comment
Read more

Mudbloods and Muggles and Magic Folk, stand and unite....

Worldwide, Harry Potter lovers and equality seekers sought solidarity by writing (in every possible variation) the word, Mudblood on their arms, their legs, their wrists, their hands...

Some 35,000 confirmed participants and probably thousands more that were pulled along in the wake of those eager to support Magical/Muggle equality, all decorated themselves and held the love of Harry Potter and the love of their fellow Mudblood/Muggles in their heart and on their arm, leg, wrist, etc.

The obvious play on the inspiring movement, To Write Love On Her Arm, is intentional, but in no way meant to be disrespectful. TWLOHA's mission is to inspire hope in those who suffer from depression, addiction and who might suffer from self-destructive tendencies and/or suicidal thoughts.

TWMOHA takes its cue from Hermione's mistreatment in the book series as a result of her Muggle(non-magical) birth. She is viewed as something less th…
Post a Comment
Read more

Writing's easy....all you have to do is open a vein

e.a.s. demers
One writer's journey through life, literature and the pursuit of publication... Book-seller by day, Book-writer by night, Book-lover at all hours.... Follow along as I take my literary journey.