Scottish Festival and a bit of poetry...


The 38th annual Arkansas Scottish Festival was held at Lyon College in Batesville, Arkansas on April 7th - April 9th. This was the first time I'd ever attended. I'm sad to say I didn't even know the festival existed until last year. On Saturday, April 8th, a group of friends and I made the several-hour trek, determined to enjoy everything we could. 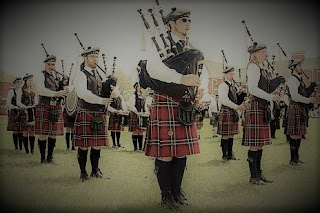 The weather was glorious, all bright, bonnie sunlight and mild temperatures. Seemed mother nature approved of the festivities. The campus was appropriately kitted out, and nearly everyone in attendance was properly *ahem* kilted out.

Bagpipes playing, we ate meat pies--- well, mine was a 5-cheese mac & cheese pie--- watched clans parade their colors, got sunburned (darn our fair, Celtic skin), and wanted the day to last forever. 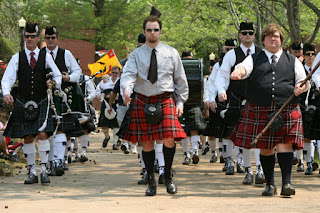 In the spirit of competition, I entered the poetry contest--brushing off and sprucing up my Kelpie poem. Because, why wouldn't I commemorate the day with a verse about a monstrous creature that roams the waterways looking for innocent people to carry off to a watery grave...this is me we're talking about.

The days since the festival were quick to put me back in my dull routine, though I would still hear the occasional deep bellow of a pipe in my head. Something about bagpipe music gets in my bones and refuses to let go.

The week passed steadily. After all thoughts of the festival were just a pleasant memory--after I stopped peeling from my sunburn--out of the blue, 2 days ago, I received an envelope in the mail from Lyon College. It contained a single check for $50. Guess whose little, dark dirge won 2nd place in the Scottish Festival's Poetry contest?!?!

In the Waters Dark and Deep

In the waters dark and deep,
where none of sunlight dare to go,
there in the cold and brackish depths,
lie the souls of those you once did know.

As black as death, as white as ice,
with teeth as sharp as bone-strength,
the fetid, foul, monstrous steed,
makes its hollow far beneath.

Take heed along the water,
trust not the feeble mare,
her wretched, dripping mane,
a sign you must take care.

Though her trembling begs your pity,
her act, beguiling, is but a ruse,
no tender heart throbs within her frame,
as life's fragile thread, she seeks to undo.

Touch not the creature stood before you,
lest your timid grasp, held-fast,
no earnest plea will save you,
as her watery web is cast.

Far below, where cries fall silent,
and those who'd help know not your plight,
the Kelpie claims your ghost to sate her hunger,
your flesh and bone, seized in savage rite.

Popular posts from this blog

April 02, 2013
Irish bean sidhe  and Scottish Gaelic bean sith , literally, woman of fairyland. The mythology and legend surrounding the Banshee is a bit mixed. The most readily accepted story is of a hag-like creature wailing the impending death of someone nearby-- most ancient Gaelic families, especially the more well-to-do families, had their own Banshees that attached themselves to the lineage of the family name. I suppose it was a sign of station for a family to be able to claim their own Banshee--- I mean, who needs an exciting/ tongue-wagging-inciting skeleton in your cupboard when you've got a Banshee wailing in your rafters? The origins of the more familiar Banshee may have stemmed from the ancient Keeners-- women who were employed to sing a lament at a funeral. The best Keeners were in high demand to "wail" and "weep" for the great personage who had fallen. The Great families would boast a bean sidhe  or bean sith--  a fairy-woman Keener--and having foresig
14 comments
Read more

May 05, 2014
A-Z blogging challenge for 2014 has come and gone, seemingly without my realizing it. And, though I fell behind once or twice toward the end, I finished this year's challenge right on time. Really, I can't believe it's already over. I feel like I just finished my post for letter A... Year 4, for this blogger, was a far cry from the tortured state of despondency that was most of  Year 3 -- I'll not mention the irony of this year's focus on death being easier to blog about than last year's foray into supernatural creatures, we'll leave that for my therapy sessions *ahem* As always, A-Z brought with it, not only 26 days of unbridled and far-reaching knowledge (disguised as entertaining and thought-provoking blog-posts), but a chance to connect with new faces while reconnecting with familiar faces--who had perhaps drifted away--from A-Z's past.  I am always amazed by the ingenuity and inspiration that comes from lumping a couple thousand folk
13 comments
Read more

Writing's easy....all you have to do is open a vein

e.a.s. demers
One writer's journey through life, literature and the pursuit of publication... Book-seller by day, Book-writer by night, Book-lover at all hours.... Follow along as I take my literary journey.